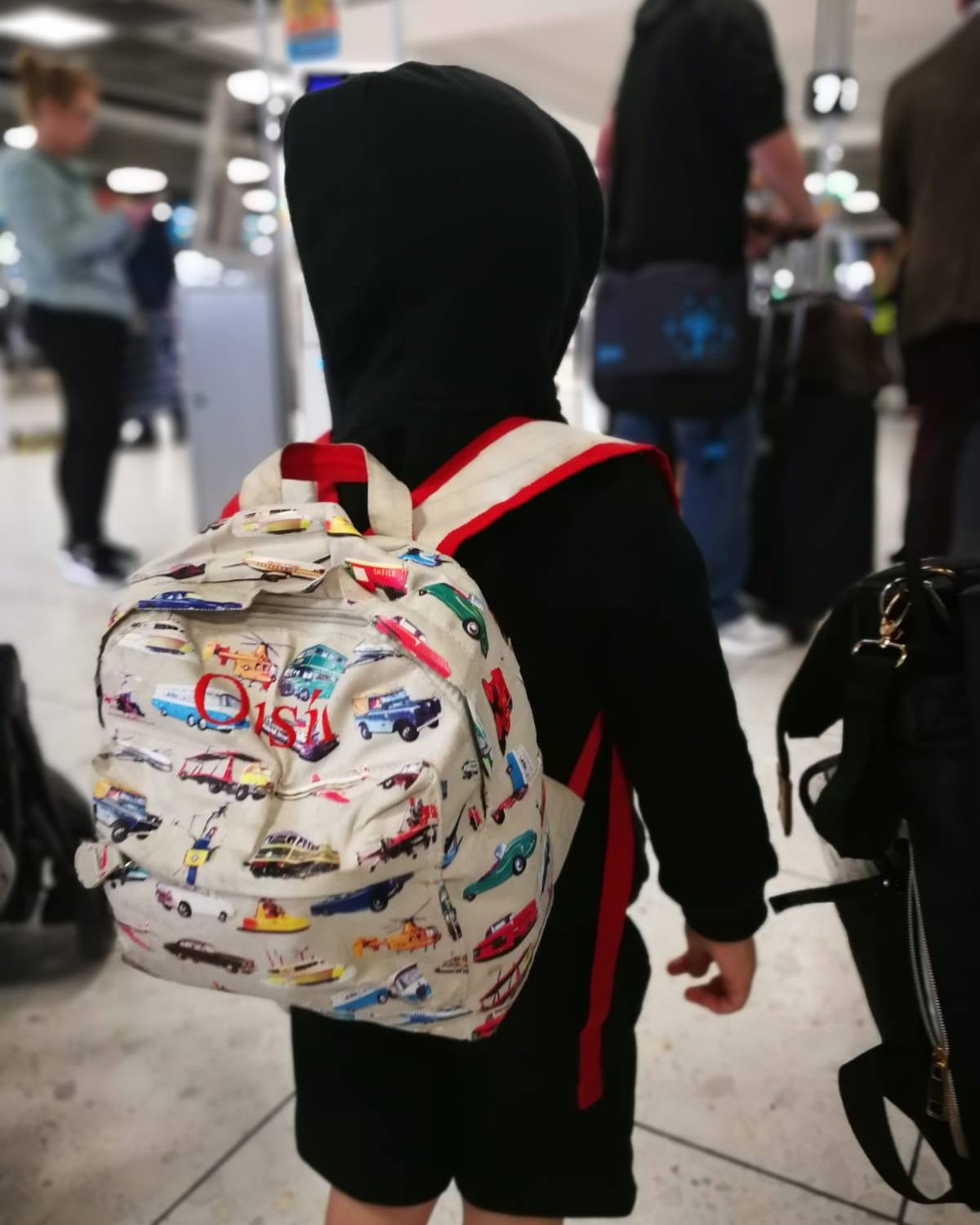 We are home from Sunny Spain to Dreary Dull Dublin two weeks now. I asked on my Instagram would anyone be interested in a blog on travelling with kids and it was a definite yes! I’m going to keep it short and sweet!

5 things I would recommend bringing and some extra tips in between! 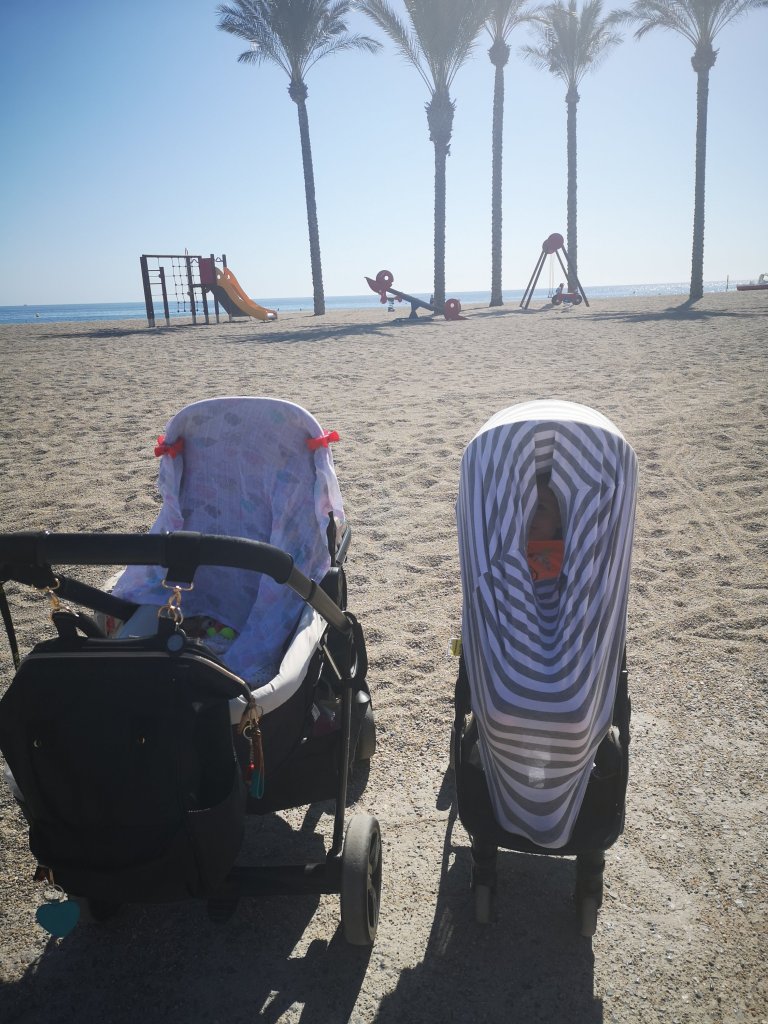 1. Bubba Baby Cover: This cover is brilliant for blocking out sun, wind, rain, can be used as breastfeeding cover and applied on swings or seats to protect your infant. Its one size fits all is brilliant as we were able to use on the stroller, car seat and pram.

2. Accessories for Babies Pram Clips: These genuis little clips attach to the pram to hold muslin squares, blankets etc creating shade for the baby. The also come in handy for holding your towel to the sun lounger!

3. Backpacks: I purchased a small one from Just a Thought for Oisín. Its a perfect size for his age and height. I packed it with colours and an activity book, a toy car, a pot of playdough and the tablet with his favourite downloaded movies. All of which entertained him till he fell fast asleep on both flights. (nap was stretched out but so worth it for peace on the plane). My baby bag is from Aldi, it has velcro straps which can attach to the pram back pack straps which was so handy for the stairs of the plane when you need all your hands! The bag was an aldi special but but I know ulluv.com sell similar all year round. 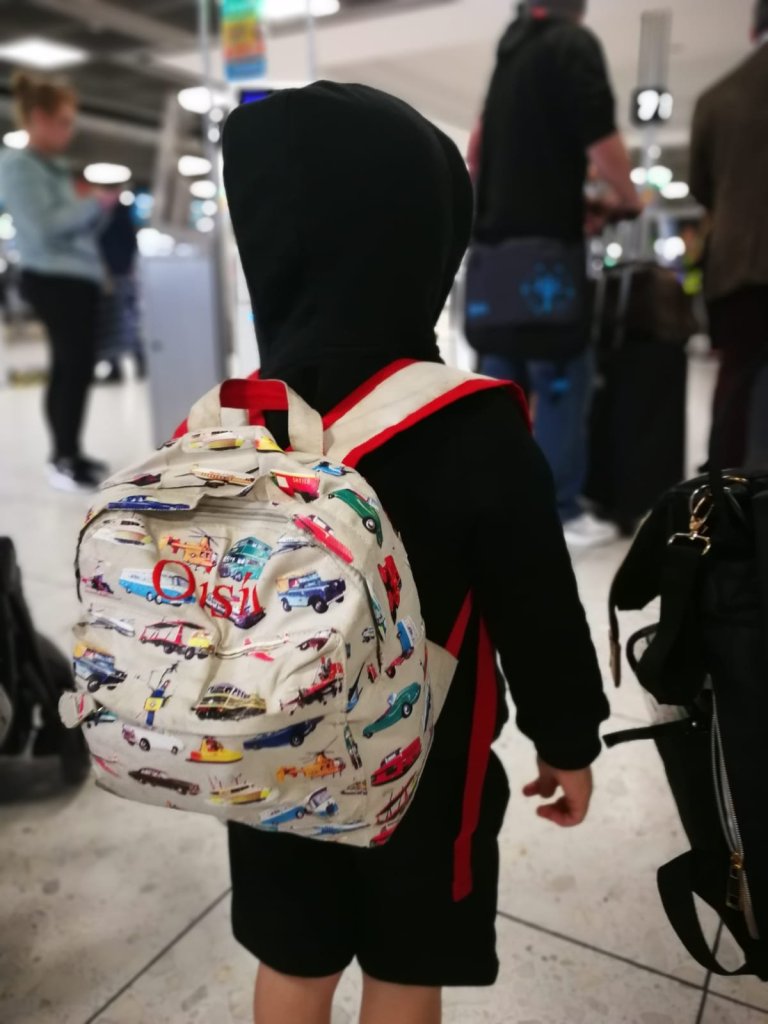 4. Travel Equipment: There is no extra charge for bringing baby equipment We debated bringing a stroller but it was the best decision ever! Oisín is 2 and 10 months but hasn’t liked being in a buggy since he could walk but he loved the novelty of it on holidays especially when he was tired. Which was handy for naptime. We bought a Joie Pact Lite a couple of years ago and it’s brilliant. Its light weight and folds down compact with a strap that can be brought as cabin baggage. We left it at the bottom of the steps though.

We brought Niamh’s car seat as I felt safer with her own. We dropped this off at over sized baggage on arrival to the airports. We hired a car seat for Oisín from the the transport company

We brought Niamh’s full pram as I felt she was too small for a stroller. It was ideal as it doubled up as her bed most nights which was handy for going out at night for food. I felt she settled better in her pram as she was comfortable in a familiar surrounding.

Finally, I would have been lost without my sling. Its so handy for the days she just wants to be held and when you want to get a few jobs done, for going to busy events or places and a pram would be too big, for when she’s unsettled and needs a nap, for the stairs of the plane when you have a toddlers hand to hold so many uses! My sling is a close caboo.

When booking Ryanair there is an option to select family plus which gives you discount on baggage and seats together. We opted for checked in bags and it definitely helped with the chaos. We would normally bring cabin baggage but it would not have been practical with 2 kids.

5. Feeding: Well I’ve never been more thankful for boobs as I was on this holiday! Breastfeeding when traveling makes things so much easier as there is no organisation involved. I brought Oisín to Spain at a similar age for 6 weeks and the amount of formula and sterilising equipment I had to bring gave me anxiety.

I packed plenty of snacks and some treats for Oisín. I brought the calpol sachets and gave them to both kids before getting on the plane. A lollypop is also brilliant for the airplane as the sucking helps with the ear popping. When travelling with young kids you are allowed bring fluids, food and medication but they are tested at security. In Dublin Airport there is a fast lane for families which makes things run smoother but we left plenty of time in case we needed it!

I was very nervous about travelling with two small kids but I shouldn’t have been. That being said I had a tribe of help at various times; my husband, my mam, dad and my sister. It really does take a village to look after kids.

Holidays with two little ones is a different kinda of break. It’s embracing the family moments amongst the chaos of changing routine, allowing the tablet, thumper and dodo for a half hours peace, stretching out nap time to later in the day so we can go out in the evening, bribery with icepops, staying in and having takeaway pizza so the kids can have an early night, swapping cocktails by the pool for building sandcastles on the beach, singing nursery rhymes, walking the promenade with two buggies instead of reading the book that was packed. Wouldn’t change it for the world! (well maybe the minus over tired tantrums 😂).

Hope you enjoyed. Send me a DM if you have any questions.

This site uses Akismet to reduce spam. Learn how your comment data is processed.